Places to Visit in Sicily

Sicily is the largest island in the Mediterranean (25,700 km²) divided into 9 provinces. Aside from Enna, each province is directly linked to the coast, allowing many travellers to freely swap the vibrancy of the cities for an idyllic sea view.

The Sicilians, renowned for prizing their unique heritage, welcome travellers looking to engage with the Sicilian culture and offer a truly authentic Mediterranean experience to those wishing to explore the island. 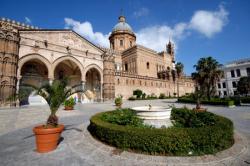 With its idyllic coastal towns, surrounding wall of mountains and picturesque beaches, it is unsurprising that tourists flock to northern Sicily throughout the year.

With its idyllic coastal towns, surrounding wall of mountains and picturesque beaches, it is unsurprising that tourists flock to northern Sicily throughout the year.

Home to the Sicily’s capital as well as some of the island’s most popular and alluring towns, such as Geraci Siculo, considered to be one of Italy’s most beautiful Italian villages, northern Sicily is bursting with charm, character and history.

Also known as the ‘Royal Palace of Palermo’, the castle was originally constructed under the Arabs but later adapted under the Normans and now houses a number of stunning golden mosaics.

Built in the city of Cefalù between 1131 and 1240 under the Norman King Roger II, the cathedral has a striking interior of Byzantine-style mosaics and some truly stunning works of art.

Built in 1174 in the town of Monreale 9km inland from Palermo, this majestic cathedral beautifully blends a variety of cultural styles, namely Byzantine, Arab and Norman.

Similar to the Church of San Giovanni, this church is a perfect example of Arab-Norman architecture with Norman plan and Arabic domes.

Situated approximately 70km south west of Palermo, this is believed to be one of the best-preserved Greek temples in the world. 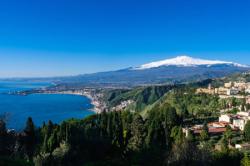 Not only is north east Sicily home to Mount Etna, it also encompasses some of the most beautiful, popular towns on the island as well as a number of the most stunning beaches in the Mediterranean.

Not only is north east Sicily home to Mount Etna, it also encompasses some of the most beautiful, popular towns on the island as well as a number of the most stunning beaches in the Mediterranean.

Taormina was born as a tourist resort with ancient Greeks, Romans, Byzantines, Saracens, Arabs, Normans and Spaniards choosing it as their residence thanks to its mild climate and favourable position 200m above the Ionian Sea with sweeping views from its hillside villas, palazzi, park and Greek Theatre. Now visitors can find fine examples of Taormina’s golden ages including:

Built originally during the Hellenistic period, the theatre was reconstructed by the Romans and used to stage gladiator shows. Today it is one of the most popular historic monuments on the island and is used to host plays, shows and concerts throughout the year and an annual film festival in June.

Italy's most elegant passeggiata and Taormina’s main street from Porta Messina at the north end of town to Porta Catania in the south, with an array of cafés, restaurants, pastry shops and boutiques.

Imposing 11th century palazzo originally built by the Arabs with a square subsequently used as a Roman forum. It now houses the Sicilian Museum for popular arts & traditions.

Palace of the Dukes of Saint Stefano

This 13th century palace, situated near Porta Catania, resembles a fortress-like tower similar to the Badia Vecchia, both probably built as strongholds along the boundary walls, to protect the northern and southern parts of the town.

This square in the middle of Corso Umberto has a terrace with panoramic views of Naxos Bay and Mount Etna, Gothic church of Sant’Agostino, church of San Giuseppe and 12th century clock tower.

17th century Baroque church of pink marble and sandstone built on the site of an ancient temple.

15th century abbey with battlements and Gothic windows characteristic of Taormina housing the Regional Archaeological Museum, with objects that were discovered in both Greek and Roman sites.

Public gardens donated by the Cacciola-Trevelyan family during the 1920's with 3 hectares of typically Mediterranean gardens including precious trees and plants, pagoda-style pavilions with caged birds and wonderful views. 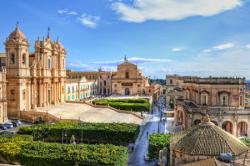 Surviving centuries of civil war, foreign invasion and natural disasters, the south east of Sicily allures visitors from all over the world to visit the UNESCO World Heritage Sites of Syracuse and Val di Noto.

Surviving centuries of civil war, foreign invasion and natural disasters, the south east of Sicily allures visitors from all over the world to visit the UNESCO World Heritage Sites of Syracuse and Val di Noto.

This area has great examples of Sicilian Baroque architecture and many historic towns situated amongst the rugged Iblei mountains which make up this interesting area of the island, along with a picturesque coastline and nature reserves.

Syracuse & the Rocky Necropolis of Pantalica

A UNESCO World Heritage site, Syracuse is notable for its rich Greek history, culture, amphitheatres and architecture and the large necropolis has over 5,000 tombs dating from the 13th to the 7th centuries BC.

"Represent the culmination and final flowering of Baroque art in Europe" and include the towns of Caltagirone, Militello in Val di Catania, Catania, Modica, Noto, Palazzolo Acreide, Ragusa and Scicli which form a UNESCO World Heritage Site, drawing art and history enthusiasts from all over the world.

This grand cathedral is arguably the most striking monument in Ragusa. Built in 1718, this majestic cathedral boasts an expertly carved exterior as well as a beautiful, elaborate interior.

The church was partly rebuilt following the 1693 earthquake and, as its name suggests, features a rather formidable staircase which offers its victors a stunning view that stretches across the landscape.

This stunning cathedral was constructed during the early 18th century but collapsed in 1996. It has since been rebuilt and opened its doors once again in 2007.

This majestic town hall was constructed in 1746 and boasts a beautifully decorated interior complete with an 18th century fresco.

In Noto, after many years of restoration this 4th century Roman villa has revealed polychrome hunting scene mosaics and a scene from the Iliad.

The hemispheric auditorium and stage were carved out of the hillside rock in the 5th century AD an expanded to its present size 200 years later. Today music festivals and Greek plays are staged here.

Situated in the Archaeological Park and built in the imperial era, it was, like the Greek theatre in Taormina, carved directly into the rock. Circuses were held here and leading citizens of the time are inscribed in the parapet. 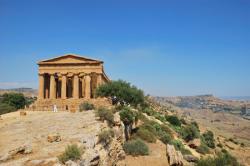 One of the more untouched, authentic regions of the island with olive and almond groves across the countryside and stunning architectural monuments standing as testament to the island's diverse history.

One of the more untouched, authentic regions of the island with olive and almond groves across the countryside and stunning architectural monuments standing as testament to the island's diverse history.

With great places of interest to visit such as the Valley of the Temples in Agrigento, Southern Sicily is not to be missed!

6km to the south west of Piazza Armerina, a grandiose 4th century Roman villa renowned for housing some of the most striking examples of decorative Roman mosaics.  It is Sicily’s most important Roman monument and a listed UNESCO Heritage site with guided tour available.

Temple of Concordia, Valley of the Temples, Agrigento

Considered to be one of the most striking, well preserved Greek temples in the world.

The Temple of the Olympian Zeus, the Valley of the Temples, Agrigento

Believed to have been one of the largest Doric temples ever constructed, completed during the reign of the Roman emperor Hadrian. Though today it lies in ruins in the Valley of the Temples, it is still an exceptionally striking sight.

The Temple of Hercules, the Valley of the Temples, Agrigento

Also situated in the Valley of the Temples and thought to have once contained a number of beautiful paintings of Hercules. 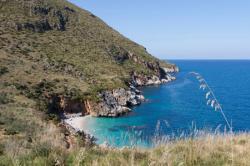 Different from the rest of the island, the west of Sicily has always been off the beaten track, closer to North Africa than to Europe.

Different from the rest of the island, the west of Sicily has always been off the beaten track, closer to North Africa than to Europe.

Historically there were Phoenician and Arab invaders who influenced the architecture and food which can be still seen and tasted today.

The Greek Archaeological Site of Selinunte

15km from Castelvetrano and home to five beautiful and well-preserved Greek temples that are believed to date back to the 5th and 6th centuries BC.