The beautiful island of Sicily remains distinctive in both its history and culture despite its close proximity to the Italian mainland, offering even seasoned travellers a unique and memorable taste of the Mediterranean.

At 25,700 km², Sicily is the largest island in the Mediterranean with nine provinces dividing its intensely cultivated landscape. Aside from Enna, each province is directly linked to the coast, allowing many travellers to freely swap the vibrancy of the cities for an idyllic bay view.

The Sicilians, renowned for prizing their unique heritage, welcome travellers looking to engage with the Sicilian culture and offer a truly authentic Mediterranean experience to those willing to explore it.

Immersed in an exceptionally diverse history, Sicily is widely understood to be not only an island of contrasts due to its Eastern and Western archaeological divide, but a world entirely unto itself.

Embracing a kaleidoscope of cultural influences, Sicily offers a taste of the Mediterranean unlike any other island. Whilst it is still very much a part of Italy, Sicily and its inhabitants uphold the island's cultural autonomy with pride. Such a fusion of cultures not only impacts greatly upon the island's archaeology, but also its cuisine, dialect and traditions, making Sicily a unique and charming holiday destination.

From historical attractions to picturesque beaches, local delicacies to family friendly dining, the island of Sicily is able to accommodate all ages and preferences. As an Italian island, Sicily welcomes families with children of all ages and offers a range of activities to suit both parent and child alike.

History lovers seeking to immerse themselves in the island's unique past are spoilt for choice with various archaeological remains scattered across the land.

Whether in the heart of the island or on its coasts, Sicily has something to suit everyone.

Sicily boasts an all year round warm climate, hot and dry from May to October rising to the mid-thirties in July and August, with cooler temperatures up in the mountains. Whilst the Sirocco (from the Sahara to the south) and mistral (from the north west) winds can blow during the summer months, the island generally maintains a pleasant climate which promotes the growth of olives, almonds, citrus fruits and wine grapes.

Winters are generally mild on the coast, but it can still snow on Mount Etna! There is a longer warm weather season than other parts of Italy with spring starting early, the ground carpeted with wildflowers as early as February. The warm weather means that it is an all year round destination and visitors can sunbathe and swim as late as November. 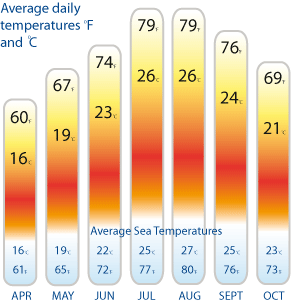